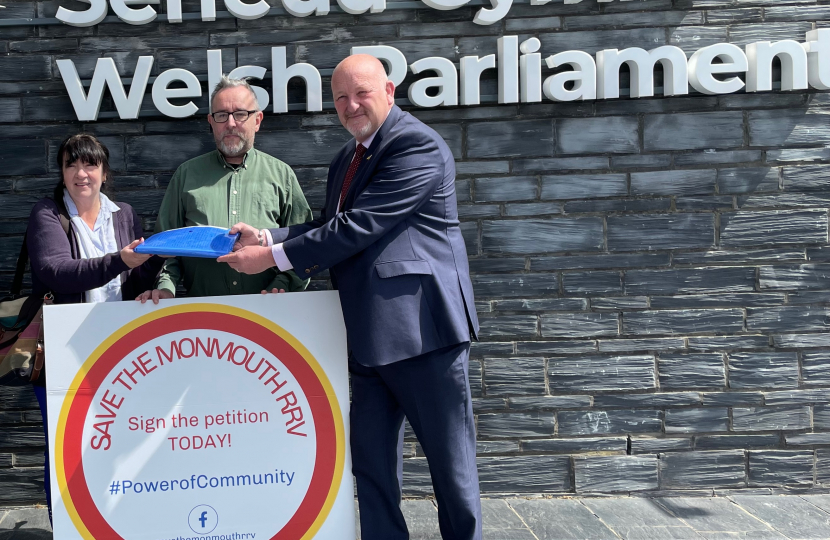 The contentious plan ignited anger across Monmouthshire, leading Lorraine Allman to launch a petition through the Senedd calling for the plan to be ditched.

The petition, which has been signed by more than 3,000 people, was today handed to the Member of the Senedd for Monmouth, Peter Fox, on behalf of the Senedd’s Petitions’ Committee for further study.

“This is an extremely important, non-partisan campaign which everyone, regardless of political colour, should get behind.

“If the RRV is removed, I dread to think of the consequences.

“People’s lives are at stake at the end of the day, and we hope our calls will now be heeded.”

“It was a pleasure to receive a petition today on behalf of the Petitions Committee on an incredibly important subject.

“My colleague Cllr Richard John and I have been clear: The Welsh Ambulance Service Trust’s plan is short-sighted, and it needs to be urgently revisited.

“Scrapping the rapid response vehicle will undoubtedly have dire consequences for young and old people throughout Monmouthshire.

“The fact that more than 3,000 people have signed the petition shows just how concerned Monmouthshire residents are. We now need to see action, not words.”

The Petitions’ Committee will now study and examine the petition’s calls.