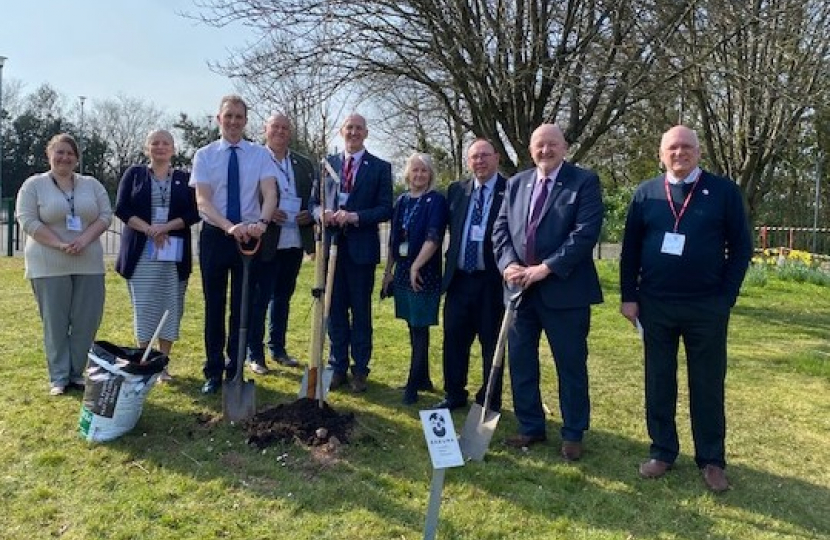 SHIRENEWTON Primary School will enjoy a spectacular springtime display of blossom in the years to come following the gift of an ornamental cherry tree.

At a commemorative ceremony on Friday afternoon (25 March), the school’s pupil leadership team planted a Japanese Sakura cherry tree donated as part of friendship project between Japan and the UK.

Monmouth MP David Davies and Monmouth MS Peter Fox were on hand to help with the digging, alongside school governor and Honorary Consul for Japan in Wales, Keith Dunn OBE.

The Japanese cherry tree, or Sakura, is one of more than 7,000 trees gifted to the UK through a friendship project paid for by a variety of Japanese businesses.

A legacy from the Japan-UK Season of Culture, which showcased Japan’s culture and people with hundreds of special events, the Sakura Cherry Tree Project has seen trees distributed to more than 200 sites in all four countries of the UK – from St Ives to Aberdeen, Londonderry, Cardiff and several of London’s biggest parks.

Around 1,000 cherry trees will be planted in Wales by the end of this year. The vast majority will be of three varieties, Beni-yutaka, Taihaku and Somei-yoshino, which have been chosen for their variation in colour, timing and historical significance.

Taihaku, for example, is a large, single white blossom variety. It became extinct in Japan but was reintroduced to its homeland by Britain’s Collingwood 'Cherry' Ingram in 1932.

Mr Davies said: “I am delighted Shirenewton Primary School was chosen to receive a commemorative tree for the Sakura project as an acknowledgement of relations with our global community and how we can all unite through enjoying and contributing to our natural environment.

“Just like our relationship with Japan, this tree will grow stronger as it matures and when it blossoms each year, I hope it brings joy to people and reminds them of the friendship between our two nations.”

Mr Fox said: “It was an immense pleasure to be a part of the planting of a Sakura cherry tree, which symbolises the deep ties between Wales and Japan.

“It goes without saying, Japan is a true friend to the United Kingdom, where our cultural and economic ties have bound us closely together for many decades.

“I am confident that future generations will warmly embrace the Sakura cherry tree.”

Mr Dunn added: “Wales and Japan have a strong relationship developed over more than 150 years. At the heart of that relationship is a desire for mutual understanding and to learn from each other's life, culture and history.

“This planting ceremony is a strong symbol of our friendship that can be supported and enjoyed by future generations and I hope, particularly at this current time, it will be embraced by our communities for the future.”