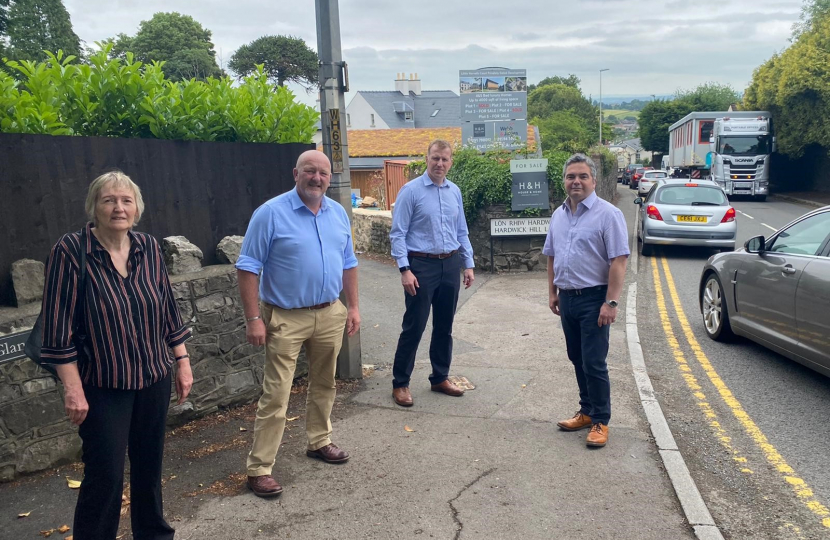 MONMOUTHSHIRE Conservatives have called on the new council administration to waste no time in prioritising giving the green light to a Chepstow bypass.

The then Conservative-controlled Monmouthshire County Council had previously made constructive steps towards securing a much-needed Chepstow bypass to tackle persistent air pollution blighting the town.

And ahead of Clean Air Day, Peter Fox, the Member of the Senedd for Monmouth, along with Chepstow Councillors Christopher Edwards, Paul Pavia and Louise Brown, have called on the new administration to continue efforts to secure the project.

“Conservative-controlled Monmouthshire County Council ensured people’s priorities were their priorities, and therefore made huge strides towards securing a bypass.

“The groundwork for delivering the ambitious project has been laid but we desperately need the new council administration to display the same level of commitment and passion for it.

“Therefore, we urge the council administration to continue the great work carried out by us to secure a Chepstow bypass.”

“People’s lives have been impacted by bottle-neck congestion and persistent pollution for too long, and I’m proud of the role Monmouthshire Conservatives have played towards securing a bypass.

“What my residents desperately need is for the new council administration to carry on pushing for the scheme to end congestion in the town centre and at the Highbeech roundabout.”

“Every year, air pollution causes an estimated 36,000 deaths in the UK and that explains why Monmouthshire Conservatives made securing a bypass a top priority.

“Air pollution is the largest environmental health risk that we face, and I urge the new council administration to continue the work laid out by Monmouthshire Conservatives.”

“Chepstow’s single road network creates a desperate need for both a Chepstow bypass and improvements to High Beech roundabout and I really hope that the new administration will commit to and recognise that urgent need.

“ I believe that Every citizen in Wales including the people of Chepstow are entitled to breathe clean air and the daily traffic congestion and queues are totally unacceptable.”